This looks like it’s going to be a great class! Robyn is an awesome person and teacher. Prices have been reduced to $250, and $120 for people of color. Get in while there’s still space!

A while back, I listened to an interview with Bren Smith on the For the Wild podcast that was really inspiring.  Bren is the Executive Director of Green Wave and the owner of Thimble Island Ocean Farm. Bren has developed a new way of practicing restorative farming in the ocean using a method that he calls 3D ocean farming, (aka “Integrated Multitropic Aquaculture” in the scientific community).

With a background in commercial fishing, Bren has witnessed the impacts of climate change on the industry.  Hurricanes Irene and Sandy devastated coastal fishing industries, inspiring Bren to develop a resilient and regenerative method for producing ocean-based food with zero inputs.  He began to grow new species, resilient species that were more affordable to grow.  He lifted his farm off the bottom of the sea, using the entire water column , making his farm resilient to storm surges.

Shellfish filters 50 gallons of water per day.  Kelp soaks up 5x more carbon than land-based plants.  His system is zero input, and produces food, carbon sequestration, and the diversity of  species of kelp and shellfish allow the system to be regenerative as well as resilient.  Kelp can be used to replace corn and soy for animal feed.  Cattle that eat a kelp-based diet produce significantly less methane than when they are raised on corn or soy.  “In the presence of Asparagopsis taxiformis—described by De Nys as “a real stand-out” among the tested seaweeds— methane production was cut by 99 percent. Experiments in sheep showed that if dried Asparagopsis taxiformis seaweed made up just 2 percent of total feed, methane emissions drop by 70 percent.”

Barriers to entry are low: permits to farm on the ocean are a lot cheaper than land leases.  You do need a boat, that’s one important component.  Bren’s Green Wave program is designed to provide information and access to this new industry, and make it accessible to those who need it most.

One of my favorite podcasts to listen to is the Permaculture Podcast with Scott Mann.  A number of the episodes have focused on Philadelphia-area Permaculturists.  It’s great seeing people getting exposure on a global platform like this podcast.  Philly has some amazing work being done.  Check them out below!

I recently stubmbled upon the website for a Permaculture Education facility at the Crefeld School!  It looks like it’s an outdoor classroom / learning area to teach about sustainable living practices, and permaculture.  From their website, “environmental sustainability is now a part of Crefeld’s curriculum.”  The project seems to have completed it’s first phase including a greenhouse, aquaponics system, chickens, and a bat house.  Future phases involve using the heat from an adjacent glass-blowing workshop to heat the greenhouse, rainwater collection, composting systems, mushroom production, and an outdoor classroom.

“The goal of this project is to develop our curriculum to enable our students to take ownership of this learning space and then share their knowledge with others. It’s happening faster than we expected. Last year, neighborhood elementary school students were invited to campus to learn more about urban agriculture. Our students became the teachers and taught a group of interested younger students about chickens and greenhouses.” 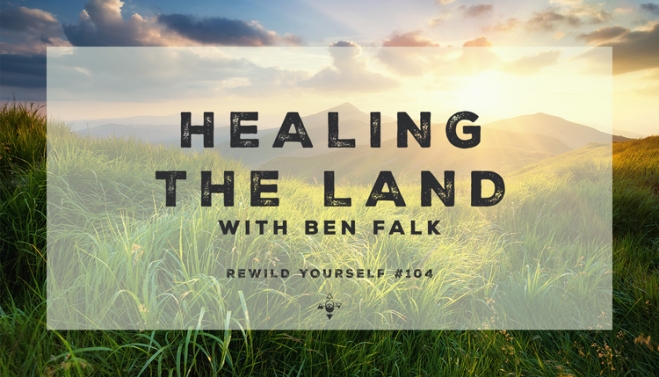 This particular podcast episode really hit home with me.  The host speaks about how dance and tribal-festival culture are related to re-wilding and communal release.  He also speaks about his philosophy toward hunting as a way to ethically and sustainably steward our local habitats.  Finally, one of my favorite permaculture practitioners, Ben Falk, discusses how he turned away from the depressive battle against ecological destruction, and focused his life on ecological regeneration.  As humans, we have a unique ability to repair and build ecosystems.  While our society necessitates exploitation and destruction by its very structures, we can choose to learn and practice a new way of living that focuses on regeneration of local resources and community.  We are nature, working.

Philly’s own Mycopolitan mushroom farm is featured on VICE munchies!  Well deserved, the Mycopolitan crew has been working for years to build an urban gourmet and medicinal mushroom farming operation in a warehouse basement in North Philly.

Check out the VICE article!

We did a short video feature on them a while back.  Check it out!

This site has gotten pretty stagnant over the past few months.  I apologize for that, but I recently moved from Central NJ and bought a house with my fiance in South Jersey.  So, I’ve been very busy, and haven’t had time for site updates or Move Screenings.  I have tried to stay active in the community, attending meetings for planning the Fair-Amount Food Forest, and I’ve been getting involved with Transition Glassboro and the Gloucester County (New Jersey) Green Party.

I anticipate having more time over the Winter months to get back to keeping the event calendar updated, and sharing articles.  I have found it easier to quickly share thoughts and interesting articles on the Philly Permaculture facebook page, so you can follow that page if you’d like.

If anyone would like to volunteer to help me update this page with fresh material, and keep the event calendar updated, please let me know!

I hope you’re all having a great Autumn, and keep doing your great work!

Sorry for the late notice on here, but Wednesday July 6th is this month’s Philly Permaculture Free Movie Screening / Potluck / Discussion. We’re also hosting representatives from Farm Philly and the EPA who will be speaking about Soil Safety and offering on-site soil testing. We’ll also be screening Dirt! The Movie! If you’d like, bring soil samples for testing and some food or drink to share.

Where: Repair the World at 4029 Market St Philadelphia, PA 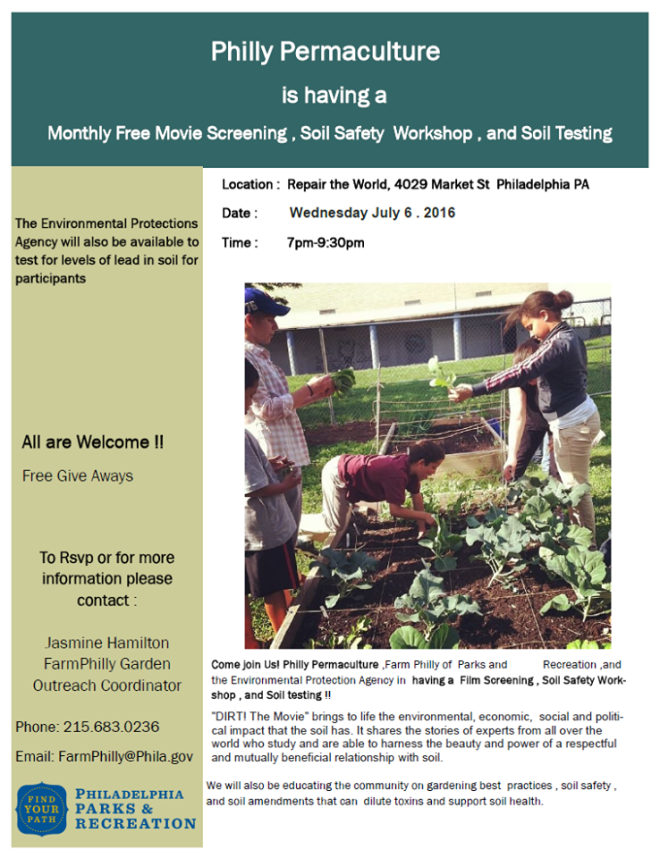 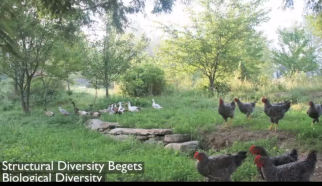 This month, we’re featuring several videos from a well-known permaculturist, Ben Falk. Ben talks about regenerating soil, water and human health while addressing some of the primary resiliency challenges of the 21st century. In another video, Ben gives an overview of Whole Systems Design, LLC and the processes they work with to affect positive change. Located in Vermont’s Mad River Valley, the business leads by example to illustrate the basics of sound land-use planning – in other words, how to adapt successfully in human society to the world’s everchanging environmental conditions. Ben defines good design as 1. being a functional fit with humanity, climate, and resources; 2.Concentrating value from energy (sun/wind/life processes) and extending it over time; and 3.Utilizing time as a fundamental resource. In a nutshell, “good design” must go beyond doing “less bad” to becoming “regenerative” – improving the health of ecosystems, increasing biomass and biodiversity, and adapting to changing conditions resiliently.

Permaculture is a design science based on the observation and replication of patterns and relationships found in nature; it is an approach to designing sustainable systems of agriculture, community, economics, politics, and more.

Bring some food to share, if you’d like. Bring your own plates and utensils, and let’s try to make this a no-waste event! We’ll have plenty of time for a discussion about the film, or about whatever else is happening in Philly related to Permaculture and regenerative living!