On November 6th, The Polish Ambassador and his crew of activist musicians brought the funk to Philly for their Permaculture Action Tour.  Joined by Mr. Lif, and Ayla Nereo with their unique musical styles, and Liminus providing live visuals, The Polish Ambassador is also travelling with a crew of Permaculture activists, spreading sweat and positive messages to communities all over the US.  It started with a IndieGoGo campaign to fund their idea for a music tour that left behind a positive footprint in each community they visit.  Their mission is to spread the ideas of permaculture and regenerative living to their audience, engaging people who come to enjoy their music, and inspiring them to participate in making their community a better place.  The tour is over now, but for six weeks they travelled across the country organizing community volunteer days to plant permaculture-style gardens, reclaiming abandoned lots for guerilla gardens, and teaching their fans about living a regenerative lifestyle.

Ryan Rising seemed to be the resident permaculture expert on the tour, and before the show in Philly, Ryan gave a 20-ish minute presentation on what they’ve done so far with the tour, planting permaculture gardens, guerilla gardening, and spreading information about permaculture.  Then, he invited Robyn Mello to speak about the Philly Orchard Project (POP), and their ongoing work in Philadelphia to plant food forests and educate people about permaculture.  POP does amazing work organizing volunteers to plant trees, and help with city gardens and farms, and even holds workshops on all kinds of awesome topics related to permaculture.   Paul Glover, another Philly activist for regenerative living and recent candidate for PA Governor, spoke about Car Free Cities.  Imagine, in a very possible future, a Philadelphia where all the streets are transformed to bike paths, public transportation, and green space; farms, gardens, and parks running down every street.  It sounds like paradise to me.

Here’s a video that I took during the concert.  Ayla Nereo and Mr. Lif improvised, using a loop pedal, collaborating with a beatboxer from the crowd, and created this awesome freestyle experience:

On November 8th, at Awbury Agricultural Village, Dale Hendricks gave a class titled Biochar – A Climate Change Solution?  The $25 class started with a lecture about biochar, what it is, and what role it can play in building healthy soils and sequestering carbon.  Following the presentation, Dale demonstrated how to set up two different size biochar stoves used for producing biochar, and cooking.  We heated up some delicious chili that Dale brought, and some hot chocolate that another class participant brought to share.  It was a great opportunity to learn about this great technique, and to meet other people who share the interest in creating healthy soil.  Biochar is created by burning organic matter, and then as the flames start to die down and the burning material is glowing, you smother the fire with more material to turn into biochar.  This deprives the glowing coals of oxygen, resulting in biochar.  A primitive way to accomplish this is to dig a large hole, burn a bunch of wood in the hole, and continuously smother the fire with more material to burn.  When the fire is eventually put out with water, and the coals cool down, you’re left with biochar.  Apparently some native cultures used to do this (likely cooking over the fires), and the soil in those areas has an extremely high carbon content, making rich soils that produce better yields compared to nearby farms without this carbon in the soil.

Biochar is essentially carbon.  If you remember from chemistry class, diamonds are also composed of carbon, but in a much more dense molecular structure.  Biochar is carbon like you might see in the tip of a graphite pencil, or in activated carbon in water filters or in fish tank filters.  A Carbon atom has four loose electrons that make it want to “grab onto” other molecules nearby.  For this reason, it is used to filter water.  In a garden, biochar is used to “grab onto” nutrients, and hold them in the soil.  These nutrients don’t get stuck forever in the biochar, however.  They are slowly made available to plants.  Biochar acts as a method to slow nutrient runoff, and hold nutrients in the soil until plant roots pull them from the soil.  For this reason, biochar needs to be “charged” with nutrients before being added to the soil.  Otherwise, it will pull the nutrients out of your soil into the biochar, and your soil may be nutrient deficient until more nutrients are added.  Biochar can be “charged” with compost tea, nutrient solutions, or even urine.  One of Dale’s suggestions was to fill a bucket with biochar, and pee in it.  The resulting biochar will be full of nitrogen for your garden. 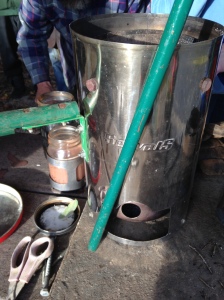 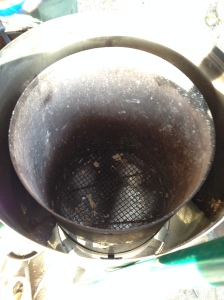 Biochar is also very porous, meaning it has tons of small pockets of air which increases the surface area available to hold nutrients.  These pores are also an ideal environment to trap water, and for bacteria and fungi to live.  Biochar creates a habitat for beneficial soil life, and increases the water-holding capacity of the soil.  After creating biochar, the result is large chunks of charcoal, which are then crushed to increase the surface area.  You don’t want to put large chunks of charcoal into the soil, although worms apparently will munch on the biochar to help their digestion.  Biochar can be crushed by wrapping it in a tarp, and driving over the tarp with your car.

The end product, chunks of charcoal to be made into biochar

Biochar also sequesters carbon into the soil, and holds it there for long periods of time.  The carbon which makes up the organic molecules in trees and plants comes almost entirely from Carbon Dioxide in the air.  When this tree and plant material is converted into biochar, and put into the soil, this is an effective way of putting carbon from the atmosphere into the soil, where it can be stored for long periods of time.  As many permaculturists will tell you, the key to soil health is increasing the amount of organic matter in the soil.  Using biochar is one way to accomplish this.

In the class, Dale stressed that biochar is not the ultimate solution to climate change and healthy soil.  Rather, this is one technique that, when used appropriately, can have great benefits to the environment and to the soil.  You may be saying to yourself, “That sounds great!  Should I be making and using biochar?” Like all things in permaculture, the answer to that question is, it depends.  Turning wood and organic material into biochar is just one use for this input.  Composting is another important technique for using this material.  Creating biogas is another solution. (Biogas is created by capturing the methane released from anaerobic digestion of organic material.  Essentially, composting without air creates methane that can be captured and used like natural gas to create heat and electricity.)

From the event page:

Dale has been growing and propagating plants professionally since 1975. In 1988 he co-founded North Creek Nurseries, Inc in order to propagate and grow perennials and grasses with an emphasis on natives and garden selections of natives. He has been honored with the American Horticulture Society’s Individual Commercial award and the Perennial Plant Association’s Young Professional award. He has taught plant propagation at Longwood Gardens and lectures widely. He served on the founding board of the Sustainable Business Network of Greater Philadelphia and as co-chair from 2004-2007. Dale also served on the founding Steering Committee for the Native Plants in the Landscape Conference at Millersville University.

In 2008 Dale founded Green Light Plants, LLC to consult on sustainable and fecund landscapes and to grow native, woodland and Permaculture plants renewably, organically and joyfully.

Dale lives with his family, gardens and makes biochar whenever he can in Landenberg, Pa.